On 10 February 2012, Richard Aedy of Sunday Profile on ABC Radio interviewed Brigid Inder, Executive Director of the Women’s Initiatives for Gender Justice, about the work of the organisation, the importance of the ICC and the cases before the Court.  In Sunday Profile Richard Aedy talks to people of interest and influence who are playing a role in public life.

Listen to the radio interview 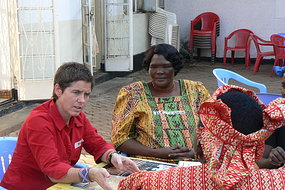