Blogpost: Calling it what it is: It is time to define “sexual violence” 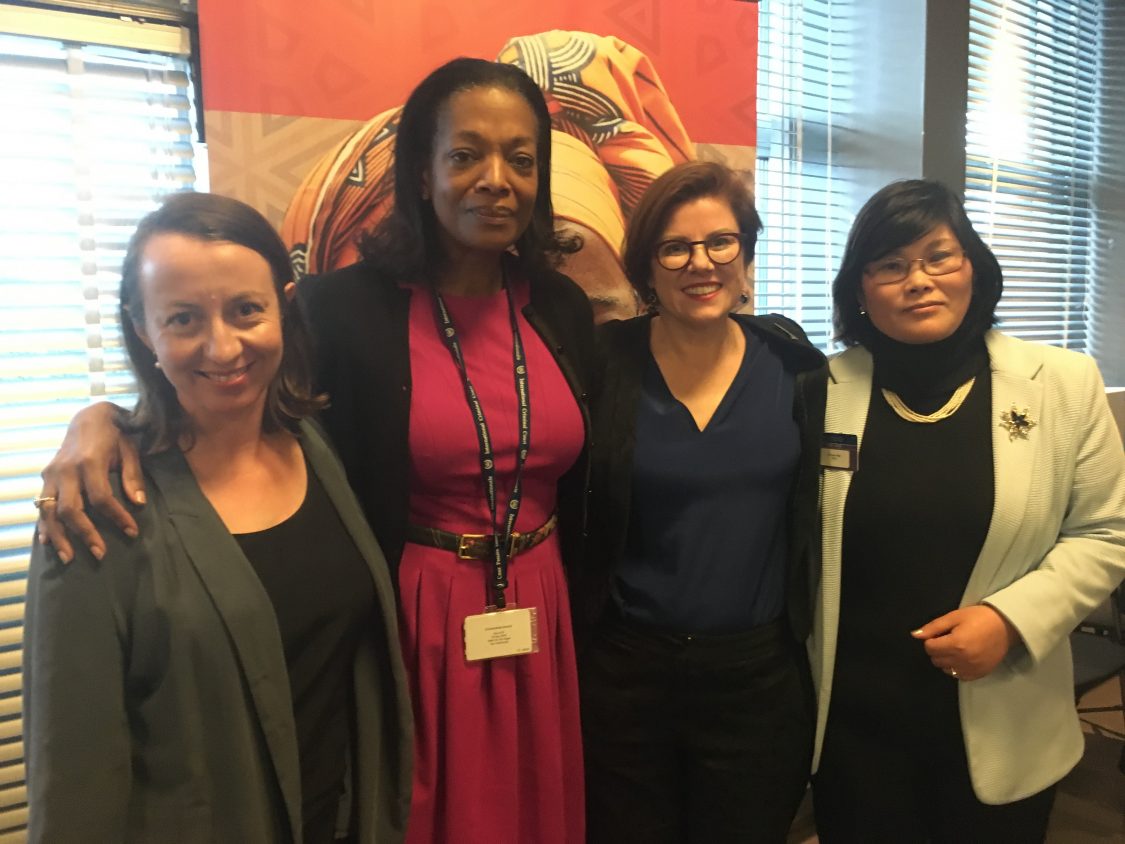 This blogpost, written by Melisa Handl and published by IntLawGrrls provides an overview of our event during the ASP17 organised with the support of the governments of Australia, Korea, Switzerland, Argentina, Canada, United Kingdom, Costa Rica, Sweden, Switzerland, and New Zealand.

From 5-12 December 2018, International Criminal Court (ICC) member states are convening at the World Forum Convention Center in The Hague for the 17th annual session of the Assembly of State Parties (ASP) to the Rome Statute. Serving as the governing body of the Court, the ASP meets in full plenary once a year to discuss and decide upon matters key to the future functioning of the ICC. Civil society is there every step of the way, monitoring sessions and interacting with delegates, in order to advocate for an independent, effective and fair ICC.

The issue of gender justice, and more specifically of sexual and gender-based violence (SGBV), takes relevance in the side meetings. In this regard, one of the most anticipated events took place on December 10, 2018, titled “What makes violence ‘sexual?’,” including the launch of the “Call it what it is” campaign and the “Gender Report Card” on the ICC 2018. The event was organized by the Women’s Initiatives for Gender Justice with the support of the governments of Australia, Korea, Switzerland, Argentina, Canada, United Kingdom, Costa Rica, Sweden, Switzerland, and New Zealand.

The panel was moderated by Siobhan Hobbs, Legal and Program Director Women’s Initiatives for Gender Justice. The opening remarks were made by H.E. Matthew E.K. Neuhaus, Australian Ambassador to the Netherlands, who briefly talked about the challenge of dealing with the impunity of sexual crimes in conflict situations. Peter Wilson, British Ambassador to the Netherlands, also joined the opening remarks.

Patricia Sellers explained the genesis of how we came to conceptualize sexual violence in international criminal law, how it is addressed today, and how we want to address it in the future. She concluded by explaining that history shows us that sexual violence is something that can destroy towns, nations, communities, and can be used as means of genocide to destroy groups. Dr. Rosemary Grey stated that the ICC was the first tribunal with a statute recognizing a wide range of SGBV. However, she emphasized that the statute does not clarify the question of what makes an act sexual by nature and that, in the jurisprudence, there is no answer to what makes an act “sexual.” Dr. Grey explained that, in the Bemba case, the prosecutor alleged sexual violence was committed as Bemba’s soldiers subjected men and women to forced nudity in order to humiliate them. However, the Pre-Trial Chamber did not include those acts of forced nudity as “sexual violence” as it did not regard them to be of “comparable gravity.” In the Kenyatta case, perpetrators forced a group of people to remove their clothes and circumcised the men using rough tools and, in some cases, amputated the victims’ genitals. The Prosecutor described these acts as “other forms of sexual violence.” The victims agreed. However, the Pre-Trial Chamber characterized forcible circumcision and penile amputation as “other inhumane acts” under Article 7 (1) (k) of the Statute because it did not regard them as “sexual in nature.”

The side event also included the launch of the campaign “Call it what is!” with remarks by H.E. Sabine Nolke, Canadian Ambassador to the Netherlands. The “Call it what it is!”campaign addresses the issue of lack of accountability for sexual violence. It is a civil society campaign that aims to think about options that otherwise we would have not have been contemplated in the definition for sexual violence, expanding our understanding of sexual violence around the world in a way that is inclusive, culturally sensitive, responds to the realities around the world, and is forward-thinking. The campaign would support the Court in considering how sexual violence is understood in different cultures by “creating a vocabulary so the ICC can speak in an inclusive language.” It aims to do so by creating a definition of sexual violence in order to serve as guide for prosecutors, victims’ representatives, defense counsel, and other judicial actors to better understand what an “act of sexual nature” involves. The campaign also included the launch of a survey (available in English, French and Spanish) that mapped different cultural perceptions on sexual violence available at the Women’s Initiative for Gender Justice webpage.

The Rome Statute is the first instrument of international criminal law to expressly include a wide range of crimes of sexual violence. However, jurisprudence of the ICC highlights the need for a working definition of what sexual violence could entail. Specifically, the ICC legal framework lacks a definition of “act of a sexual nature” (found in the ICC Elements of Crimes for sexual slavery, forced prostitution, and “other forms of sexual violence”).

As of this morning, there were more than one hundred responses from diverse geographical regions that will inform a civil society effort to develop a declaration on sexual violence, probably a non-exhaustive list.

Dr. Rosemary Grey explained how initial responses to the survey showed the range of thinking in this topic, including many acts such as forced nudity, sexual mutilation, forcing victims to watch an act of sexual violence, and forcing victims to rape others. One response that appeared many times is the “non-consensual circulation of sexual images” in media. Other examples also included forced virginity testing in order to check the condition of the hymen, groping, total abortion bans, forced abortion, and denial of contraception methods, among others. Some responses also referred to historical precedents: human experiments of a sexual nature, such as Nazi experiments on homosexual men and practices in concentration camps whereby homosexual men were not allowed to put their hands under their blankets under the presumption that they would otherwise masturbate, “weaponizing the victims’ sexuality against them.” Shaving the heads of women who have had sexual connection with the enemy as a way to humiliate them, unwanted or forced touching of body parts, violating a victim’s sexual privacy, and violations affecting reproductive rights and reproductive autonomy, were also among the sexually violent acts mentioned in some of the responses to the survey.

The expressive harm of denying diverse sexual-based crimes their recognition as related but distinct crimes is silencing the wide-ranging spectrum of gender-related harms that victims often experience.Victims of gender-based crimes not only experience forced penetration. There are gender-based harms that are equally or even more physically, psychologically, socially and emotionally harming than rape. Crimes such as enforced prostitution, sexual slavery, forced abortion, the transmission of sexual diseases, and forced pregnancy often provoke irreversible internal organ damage, psychologically traumatize the victims for the rest of their lives, subsume them in shame and guilt, and socially stigmatize them within their communities.The ICC – a role model organization with a clear gender-sensitive mandate – has the capability to establish a gender perspective that can guarantee the effective investigation, prosecution and trial of gender-based crimes. No other institution in the world has such a significant power to contribute to ending the era of impunity for gender-based crimes.