On 30 January 2020, Women’s Initiatives convened a working group meeting with prosecutors and investigators to discuss keyways in which The Hague Principles on Sexual Violence and other tools can be used to advance survivor-centred justice for sexual violence crimes. We would like to extend our thanks to the Institute for International Criminal Investigations for hosting and Maxine Marcus, Director at the Transitional Justice Clinic, for moderating.

The feedback was tremendously useful in informing strategies on advocacy around The Hague Principles on Sexual Violence for the upcoming year.

On 2 December 2019, Women’s Initiatives held a panel discussion at the annual session of the states who are party to the Rome Statute, the founding treaty of the International Criminal Court. The panel discussion was the first time the Hague Principles were presented. Titled ‘Translating the lived experience of sexual violence survivors into law and policy’, the panel focused on the findings of the Call it what it is campaign consultations with survivors of sexual violence; discussing how the ICL Guidelines will inform international law practitioners, including at the ICC; and discussing the implementation of The Hague Principles of Sexual Violence at the international and national level.

Followed sustained advocacy by Women’s Initiatives, a number of states mentioned the campaign and/or The Hague Principles on Sexual Violence in their general debate statements. Also, several references were included in the ASP various adopted resolutions to commit to work on enhancing accountability for sexual violence.

On 14 October 2019, Women’s Initiatives together with the University of Paris II Pantheon-Assas and the Centre Thucydide held a panel discussion entitled Better understanding what is sexual violence: Exchanges in the context of the Call it what it is campaign.

Organized in cooperation with the Human Rights, Gender and Conflict Studies: Justice Perspectives major at the International Institute of Social Studies and the Refugee Law Project, based in the Faculty of Law at Makerere University in Kampala, Uganda, the panel discussed the Call it what it is campaign and efforts to enable disclosure by survivors of sexual violence.

On 26 September 2019, Women’s Initiatives for Gender Justice launched the Civil Society Declaration on Sexual Violence during a meeting with Call it what it is campaign partners based in The Hague. We are grateful to the 550 survivors, 525 survey respondents, 54 NGO campaign partners and more than 30 expert reviewers contributed to the Civil Society Declaration, making it a unique guidance document to better understand sexual violence 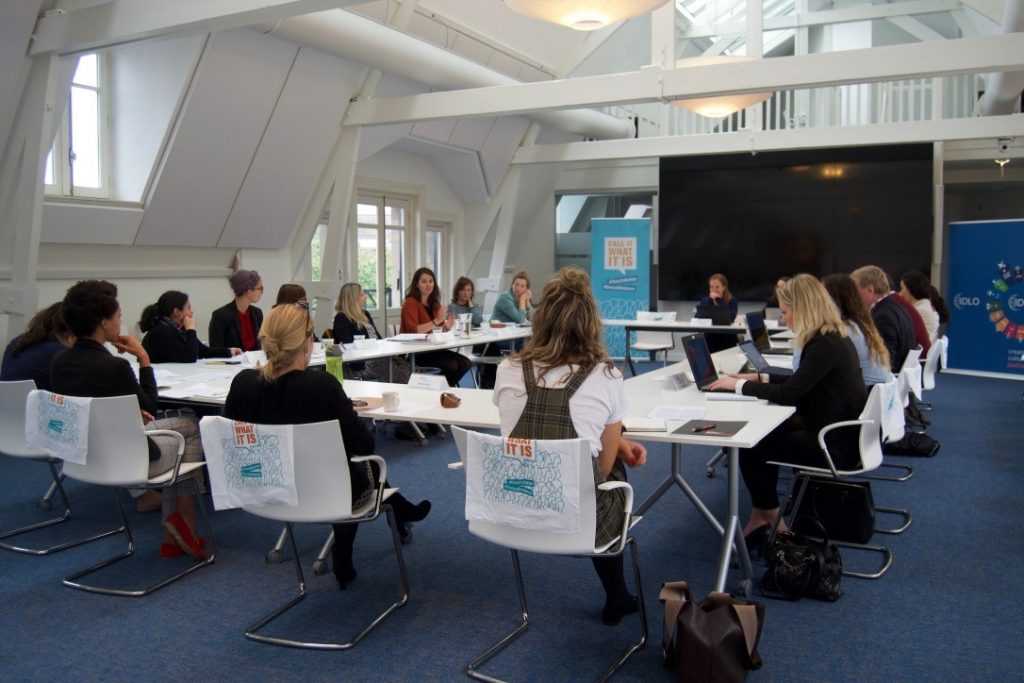 Women’s Initiatives for Gender Justice marked the 2019 International Day for the Elimination of Sexual Violence in Conflict with a panel discussion called “Translating the Lived Experience of Sexual Violence Survivors into Law”, co-hosted with the Embassies of Canada, Sweden, Switzerland and the United Kingdom to The Netherlands.

The lively panel discussion touched on many critical issues fundamental to the Call it what it is campaign, including how sexual violence in conflict is addressed in various accountability efforts and what needs to be done to better understand this form of violence. Central to the panelists’ interventions was the need to involve survivors in initiatives aimed at addressing sexual violence.

The panel discussion took place at the Leiden University the Hague Campus on June 19, 2019. Read the full report here.