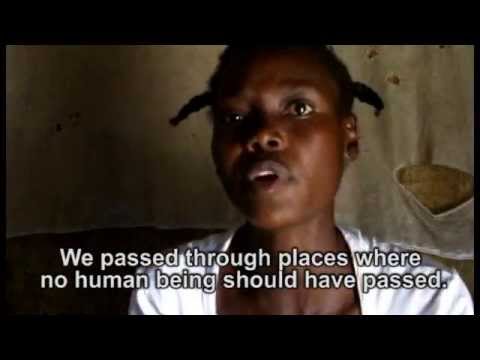 No Longer Silent, co-produced by the Women’s Initiatives for Gender Justice and local Ugandan partners in collaboration with WITNESS, features six testimonies of women abducted by the Lord’s Resistance Army (LRA) in Northern Uganda and their demand for justice, access to land, housing, livelihoods and psycho-social and medical assistance. Through their testimonies, this advocacy film highlights the need for the Government of Uganda to implement the Juba Peace Agreements (2007-2008) and transform the current priorities of the Peace, Recovery and Development Plan (PRDP) to include women as stakeholders and beneficiaries in the reconstruction and recovery process.

The Women’s Initiatives for Gender has been working in Uganda since 2004 and has over 5,000 members and partners who are grassroots women’s rights and peace activists in the conflict-affected north and north-eastern sub-regions of Uganda.

No Longer Silent is a part of a larger video advocacy initiative launched in 2010 between the Women’s Initiatives for Gender Justice and WITNESS in which more than 30 partners of the Women’s Initiatives have been trained in video advocacy. The project has produced six gender justice films highlighting sexual and gender-based violence and other gender issues in armed conflicts, fragile states and post-conflict environments.

Five of the six countries selected for the video project currently have situations under investigation by the ICC—Uganda, the DRC, the Central African Republic (CAR), Sudan and Kenya. They are also countries in which the Women’s Initiatives has extensive domestic peace and justice programmes and well established partnerships with a large number of grassroots women’s rights and peace advocates, networks and organisations.

In addition to No Longer Silent,other videos in this series include Our Voices Matter (the DRC), Bridging the Gap: Reinforcing Gender Desks in Nairobi (Kenya),Our Plea (the CAR), and a Sudan video (unnamed for security reasons). The documentary on bride-kidnapping in Kyrgyzstan is currently in post-production.