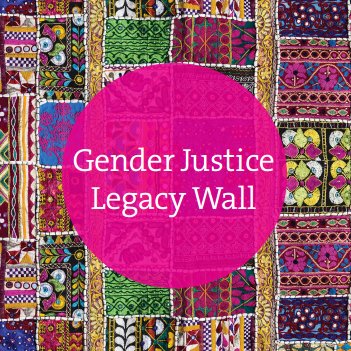 On 7 December, the Women’s Initiatives for Gender Justice hosted the global launch of the Gender Justice Legacy Wall (Legacy Wall) which celebrates and honours some of the women and men who have contributed to advances in the gender justice field over the past 125 years.

The Legacy Wall recognizes 151 judges, prosecutors, advocates, victims, witnesses, politicians, diplomats academics, grassroots and international organisations and UN personnel who have contributed to raising awareness about violence against women including conflict-related sexual violence, and who have contributed to establishing and expanding justice for victims of these crimes.

The Legacy Wall represents an enduring tribute honouring the expertise, vision and inspired action of women and men from different millennia, regions and sectors which transformed our world and inspired future generations.

See the Gender Justice Legacy Wall and the Honourees here.

– The mothers of the Plaza de Mayo in Argentina who insisted on knowing what happened to their children and other loved ones when more than 30,000 people were abducted and killed by the military and state security forces.

– Evelyn, Victoria, Esther, Winnie and Grace  – women whose names you won’t have heard of but who are leading a quiet revolution in northern Uganda transforming their own experience and that of others who were also victims of rape and long term sexual enslavement by the Lord’s Resistance Army (LRA).

– Bertha von Suttner, author and one of the leading figures in the international peace movement in the late 19th century, a pioneering advocate against conflict in the years leading up to the first world war.

– Ben Ferencz who, along with other lawyers of the Nuremberg Tribunal, established the practice of prosecutions of international crimes and who remains one of the clearest global voices on justice issues advocating for a kinder and more inclusive humanity.

– Coalition of Violence Against Women (CoVAW) in Kenya and Sara Hossain in Bangladesh who pursue domestic prosecutions and other remedies for conflict or post-election related sexual violence as international crimes.

Brigid Inder OBE, Executive Director, Women’s Initiatives, said: “This is a historic moment for the field of international gender justice. While a lot remains to be done to prevent sexual and gender-based crimes, provide redress for its victims, and transform entrenched inequality between women and men, it is also important to celebrate the progress that has been made in this field and to recognise and honour some of those who have contributed to these developments.”

The Legacy Wall was launched at an event in New York during the annual Assembly of States Parties of the International Criminal Court (ICC). The Women’s Initiatives is working with the ICC to have the Legacy Wall installed within the Court during 2018 at one of the 20th year anniversary celebrations of the adoption of the Rome Statute, the founding treaty of the ICC.